We visit a restaurant called ‘Otaku’ in France, eat some otaku sushi 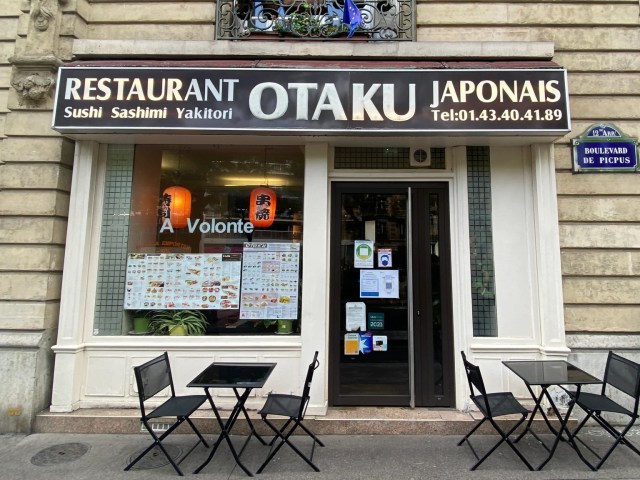 We expected the Parisian restaurant to be overflowing with anime goods, but the reality was something quite different.

Our Japanese reporter Ikuna Kanezawa has once again found herself traveling the world, doing what she does best — discovering the best Japanese restaurants outside of Japan. Previously, she’s sampled sushi from Egypt and ramen from Spain, and now she’s turned her sights on the streets of France, specifically its capital, Paris.

This isn’t Ikuna’s first rodeo with Parisian cuisine, so as she walked down one of Paris’ many so-called ‘otaku streets’, she figured she’d seen it all.

And then she saw it — at the end of the rue Voltaire, a restaurant with a strikingly unusual name.

▼ The building the restaurant was in was gorgeously Parisian, but on the ground floor…

While there are certainly a number of restaurants that just use a Japanese word without knowing its actual meaning, the word ‘otaku’ has gained so much worldwide notoriety that even legendary rocker Gene Simmons knows what the word means…kinda.

From the outside, Otaku looks like a normal enough Japanese restaurant, so Ikuna was struggling to see where the ‘otaku’ part came into it; was it a place for Parisian otaku to gather and talk about their favorite manga? Was it filled to the brim with anime goods? Taking a deep breath, Ikuna grabbed her camera and went inside…

…only to find a completely normal-looking restaurant.

▼ Not a single figurine in sight!

There were a few Japanese decorations like paintings dotted about the restaurant, but it felt more like a regular French restaurant than a Japanese one in Ikuna’s opinion.

▼ It would be easy to miss the fact that it was a Japanese restaurant if you didn’t look closely.

The patrons in the restaurant looked relatively ‘non-otaku’-like too. If Ikuna imagined really, really hard, she could almost believe that she’d stumbled into some sort of gathering for ‘otaku who don’t look like otaku’. Instead of imagining she was in a room full of French people who were secretly otaku, though, she decided to focus her energy on the menu.

The course was an all-you-can-eat meal that included sushi, sashimi and yakitori to name a few, and cost 12.9 euros (US$13.61) for lunch and 17.9 euros ($18.89) for dinner, which by Parisian standards was a pretty reasonable price.

▼ Food was ordered via an order sheet, which is helpful if you’re not fluent in French.

▼ The sushi available seemed like what you’d see on a regular Japanese menu though, with options like salmon roe, tuna and shrimp.

▼ The side dishes looked delicious, too, with various kinds of yakitori and tempura on offer.

▼ The maki rolls and California rolls were making Ikuna’s mouth start to water!

But just as she got ready to order all the yakitori her stomach could handle, she noticed something that threw a spanner in her delicious lunch plans. The high-ticket menu items like the salmon roe sushi, shrimp sushi and yakitori were only available for dinner. Another strange addition was that the gunkan rolls were part of the lunch menu, while the nigiri sushi was only available on the evening menu.

Even without the fancy sushi and yakitori, there was still plenty to order, though, so Ikuna decided to start with a miso soup.

But this miso soup was like no miso soup Ikuna had ever tried before, as floating on the top were mushrooms and roasted sesame seeds. The soup stock tasted pretty good though.

▼ Otaku’s soup spoons had the Japanese word for ‘delicious’ with a picture of an eggplant on them, for some reason

But Ikuna didn’t come all the way from Japan just to eat some miso soup, so she ordered what any fan of Japanese food would in her situation — some sushi. The only actual sushi with raw fish available on the lunch menu were the salmon nigiri, salmon gunkan rolls and the tuna rolls, so that’s what she ordered.

This was undoubtedly some real sushi, except…

… the amount of rice was enormous!

After a quick glance at the online reviews for Otaku, it seems many people agreed with Ikuna that the balance of fish and rice was off. This came as a relief to Ikuna, who had almost believed that this was considered a normal amount of rice in Paris. She had to admit that the rice was delicious though, and the sushi sold here would probably do well in Japan.

Strangely, the thing Ikuna was looking forward to the most was something not really Japanese at all, but the broccoli stir-fry. Traveling on a budget means you don’t often get a chance to eat as much vegetables as you should, and especially in a city that’s as pricey as Paris, this was a great opportunity for her to snack on something green without breaking the bank.

There were other side dishes too, like this fried calamari, but Ikuna’s stomach had very little space left after the hefty amount of rice that came as part of her sushi, so she couldn’t eat as much as she’d been planning to.

In the end, Ikuna came to the conclusion that Otaku was more in the style of an Asian buffet than a Japanese restaurant, but it was delicious nonetheless. If you ever find yourself in that particular Parisian neck of the woods, be sure to check it out. If you’re in the market for something decidedly more Japanese though, Ikuna also recommends the ramen restaurant that’s “more Japanese than Japan” in Rue de Richelieu.