Poached chicken coated in a creamy curry sauce: Angela Wood proudly remembers the recipe for “Coronation Chicken” served for the coronation of Elizabeth II in 1953, which became a classic of British gastronomy that she helped create .

Available as a prepared meal in supermarkets, as a filling for sandwiches or in several variations in cookbooks, “Coronation Chicken” – or “Queen Elizabeth Chicken” – is now an integral part of the culinary landscape in the United Kingdom. “But it’s not the same recipe (…), just mayonnaise to which we add a little curry”, laughs Angela Wood, aged 89, about these modern versions, receiving the press in his pretty house in the market town of Kimbolton, in the green countryside of Cambridgeshire, in the south-east of England.

She was 19 when, a student at the Cordon Bleu culinary school on the Winkfield site (near Windsor Castle), she was given the task of refining the recipe imagined by the establishment’s manager, Constance Spry, who was to organize the banquet for foreign dignitaries after the coronation ceremony, June 2, 1953. Elizabeth II, aged 96, ascended to the throne on February 6, 1952 when her father King George VI died, marking the start of a reign of unprecedented length in the United Kingdom. “It had to be a little spicy, but not too much” to please everyone. Another constraint, the dish had to be prepared in advance, therefore cold, says Angela Wood, lively and elegant with her short cut white hair, her fuchsia lips and her matching cardigan. As for the ingredients, they had to be readily available in the UK. Imported food remained limited – even for a royal banquet – while the rationing imposed during the Second World War (1939-1945) had not yet been completely lifted. 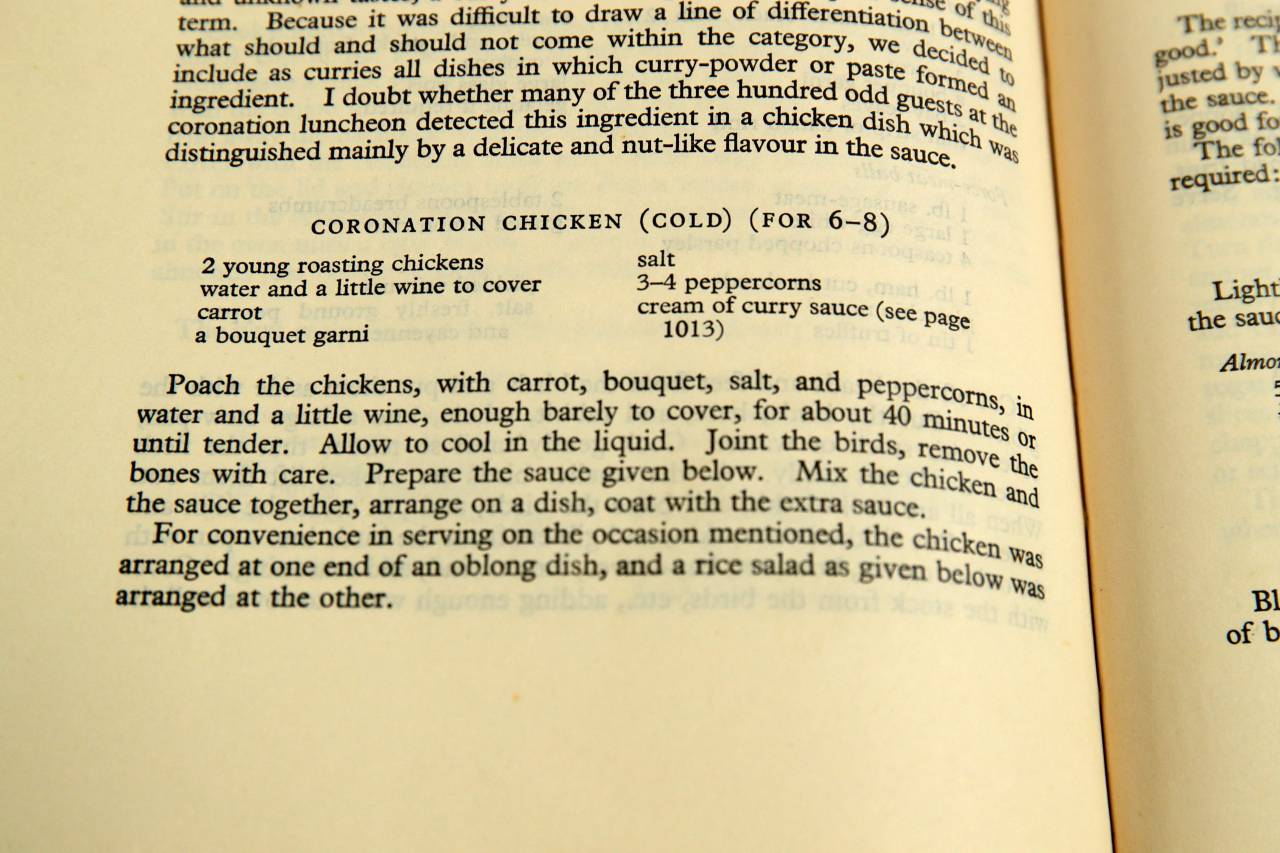 Angela Wood therefore gets down to cooking, experimenting “two or three times a week, for three or four weeks”. “We were constantly boiling chickens,” adding or removing an ingredient, she recalls. Until you find the right balance, explains the octogenarian, showing the original recipe, published in an old edition of the Constance Spry Cookery Book, a renowned cookbook: poached chicken with bouquet garni and for the sauce, an onion reduction sliced, curry powder, tomato puree, red wine and lemon juice, added to mayonnaise and lightly whipped cream, with apricot puree. “It’s a funny mix” which, tasted in the early stages of its elaboration, “is so strong and horrible”, she concedes, continuing: “Hard to believe that you have done well. »

She is sometimes asked why she did not use mango, as in many current recipes. “Well, we didn’t have mangoes, Greek yogurt and things like that. Today, people add all sorts of things,” she replies. On the menu at the time, written in French, the dish was called “Chicken Queen Elizabeth”. Served to 350 foreign dignitaries with a rice salad garnished with peas and herbs, it is preceded by a tomato soup with tarragon and river trout, and followed by a strawberry galette. All washed down with Moselle wine and champagne.

The vagaries of life did not really allow Angela Wood to exercise her cooking skills professionally, instead taking care of the family farm after her marriage. But she still sometimes prepares the famous recipe, with her daughter, when they receive. She says she is “honoured” to have contributed to creating this British classic, which earned her to be received by the Queen, at the beginning of February, during a reception organized at the royal estate of Sandringham to mark the milestone of her 70 years of reign – with canapes at the “Coronation Chicken”.

For this platinum jubilee, which will give rise to four days of celebrations at the beginning of June, the British have been invited to imagine a dessert for the queen as part of a competition. “It is rather surprising to see how the ‘Coronation Chicken’ has stood the test of time and I hope it will be the same” for the dessert, confides the octogenarian, because Elizabeth II had “the most incredible reign” and “dedicated his whole life to the country”.

Poached chicken coated in a creamy curry sauce: Angela Wood proudly remembers the recipe for “Coronation Chicken” served for the coronation of Elizabeth II in 1953, which became a classic of British gastronomy that she helped create .Available as a prepared dish in supermarkets, as a filling for sandwiches or available in several…

Sally Schmidt, the grande dame of California cooking, left behind her cooking instructions

Poached pear, beef cheek and Mexican cakes, our good addresses of the week in Paris