Riccardo Camanini: My Job is Always the Same

The chef was one of the key speakers at Identity Golose 2022, where he presented a series of dishes based on pasta, an ingredient that he’s passionate about, with which he experimented a lot, turning it into a ‘mostarda’ as a side dish. We met him after his speech by him at the Milanese congress: this is what Riccardo Camanini told Fine Dining Lovers. 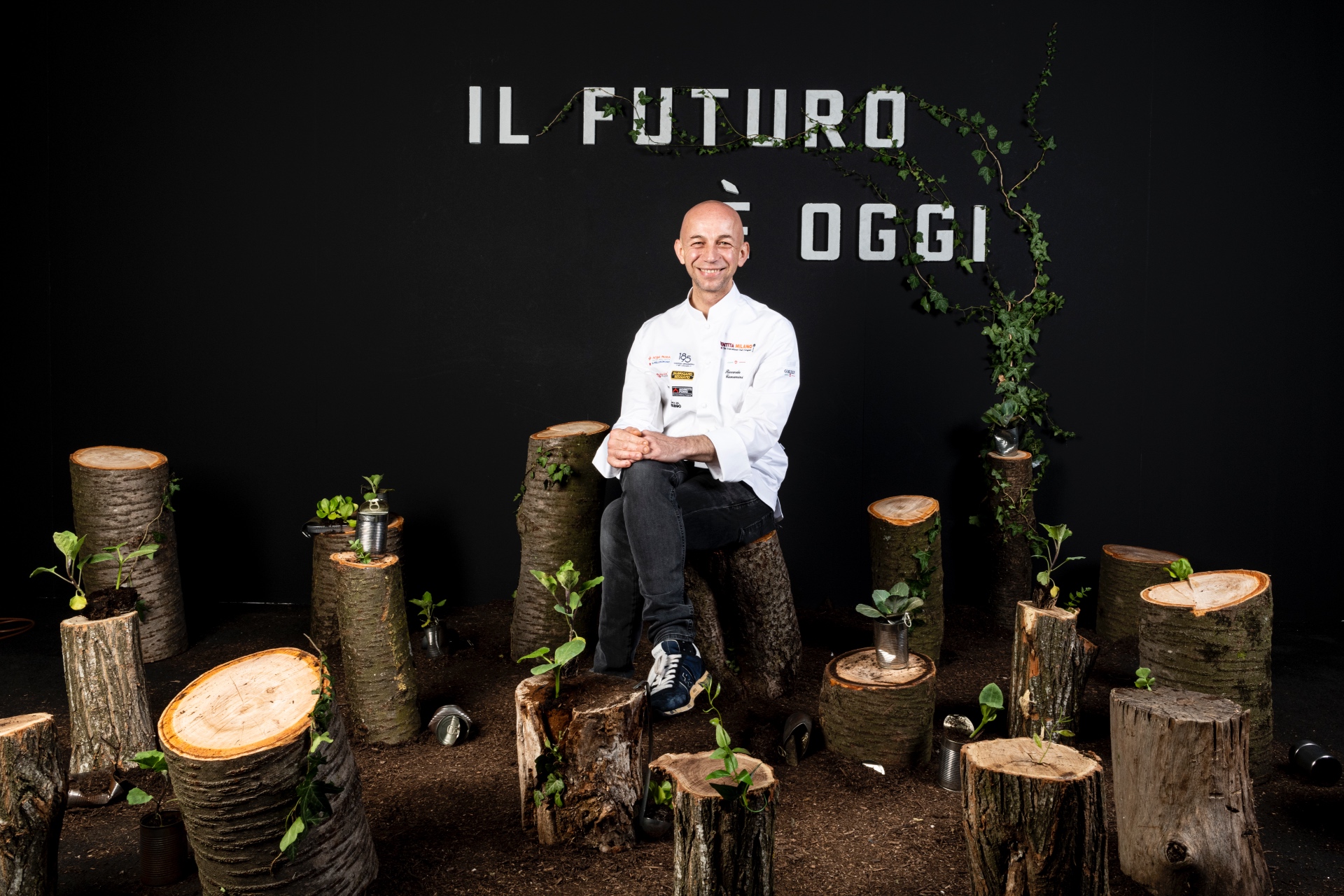 How did life at Lido84 change after your various 50Best awards?

To tell the truth, we were already full before these awards, but the waiting list got longer after receiving them, so we had to implement some new management tools to help us manage additional requests. We put in new software and took on another person in the restaurant to help us with the management. It’s clear that it is a recognition that gives you enormous visibility, but luckily we have remained anchored to what we were doing before. In my daily life I have always lived 99% of my day in the kitchen and I have remained there. The benchmark of dreams and experience is clearly raised by many customers, so expectations are always very high and we try to improve ourselves, grow and move forward to meet these expectations. But I must say that – as good people from Bergamo – we have continued to be always present as we have done until now, trying to improve all aspects of our service: we have decreased the number of seats since autumn 2021, immediately after the award . Today there are 32 covers for lunch and 35 for dinner (down from 40).

Fewer covers: is that a choice to look after customers even more?

We did it to be even more precise and focused on our guests: in the future the need will be to lower the number of seats even more, to raise our quality standard. I always remember a phrase from Marchesi. “Master, how does it feel to be awarded three Michelin stars?” I asked him one day. He told me: “But I think that this is a question that I too had asked the michelin gentlemen, when they awarded me the three stars: so what should I do now? But nothing – they replied – you continue to do what you have done so far, because if we have given you the third star it is because what you do is okay.” Beyond the very strong media attention, I must say that the life of all of us continues as before, spontaneously, we continue to do our own work, in our role. In the kitchen, however, we took on two more people. In addition to Stefano, who will take care of planning and the creative part with me, doing research and development, there are Gilles and Nino, the two new sous chefs.

At Lido84 the management of the dining room is really interesting. It’s much more informal and relaxed than that of other restaurants of the same level: is this the future of the fine-dining approach?

It’s difficult to answer what the future of fine dining looks like. What we are doing in the dining room, and therefore our style of hospitality, is because it’s what feels most authentic and close to us: in the same way in which we host people at home, as a basic necessity, we want to transfer the gastronomic message to the guest. Such as? With the author closest to gastronomy, who is the cook. So we tried to make our guys authors, because they play a very important role, they make up the team and have all the rights to be able to exercise and manifest themselves. Surely this maybe comes out a little bit out of the classic management and some plastered cliché, even if I must say that the excellent dining room service that you see in many restaurants is still valid. We simply tried to communicate who we are and what we wanted to give in terms of hospitality, with a more spontaneous and direct approach, with a wider, more natural and open familiarity and empathy.

How did you experience the pandemic? On the stage of Identity Golose you said that you had seen many documentaries…

It was very unusual for us, because many cooks live a really hectic life, made up of many hours at work and sacrifices and, usually, those who do this job start at a young age. I myself have been doing this job for more than 30 years at a fast pace, so the first sensation I had was paradoxically almost an ‘okay, let’s rest, maybe it’s time to be able to say stop and give space and listen to who we are’. My brother, Giancarlo, and I lived at home as we had probably never had the opportunity to do before: we were in Gardone Riviera. Living in a small province was a great fortune, that of being able to remain anchored to a territory that we love very much, and having a less claustrophobic perception of the situation than those who lived in the city.

Has your approach to cooking changed?

Obviously, during the pandemic emergency, all the fears, uncertainties and hesitations that covid brought with it also surfaced in us all. But our approach to cooking has not changed – on the contrary, we have maintained the same impulse of investments within the company: every year we dedicate an economic part to growth and a part to the guys, then we always try to devote a lot of time to creativity, and we did it… In my opinion, we have not changed anything: our intent remains, and has always remained, the same, that is to try to improve ourselves and move forward.

On stage at Identity Golose you gave an entire lesson on pasta, a product at the base of many of your iconic dishes: is this the ingredient you would never give up?

There would be many ingredients that I would never give up: certainly, among these, there are pasta and extra virgin olive oil… Let’s say everything that is Italian. Probably, the ingredient that I will never abandon over time will be the anchor to memory, which has built my taste. Therefore, I will never leave the flavors of our region, of our province and, of course, pasta will never be missing in my kitchen: it has given me so much.

Speaking of tradition, they say “learn the art and put it aside.” You have transformed pasta into a side dish: evolution or provocation?

This is what I asked myself, metaphorically comparing pasta to an animal like the platypus: is it an evolution or an involution of the species? Surely the platypus is a curious animal and, in the same way, I wanted to make a curious pasta. Such as? First of all, in terms of taste, because I put a pasta in ‘mostarda’ for the first time: I did some research and I found that no one had ever tried it before. Secondly, positioning pasta as a side dish. I think that in the Middle Ages, when they started boiling pasta, they didn’t ask themselves if this gesture would be handed down in the future or if it somehow represented it: it is the point of view of an artisan who wanted to try to interpret pasta. in a different way, in terms of taste and location.

Is pasta the protagonist of the new menu?

Yes, pasta is absolutely present, delivered in three ways: treated as a filling, presented in a canonical way, and as a side dish. As a filling, the pasta is a chopped tagliolino. Once a customer asked me: “How do you cut the pasta?” I replied that when we are children, to eat spaghetti, we cut them. This is also a way to say no to clichés and preconceptions. Thus was born a sort of cabbage stuffed with tagliolini and cod tripe. In my interpretations, then, there is Pasta 84 Hourswith Marinda tomato and pistachio, then pasta roasted under ‘mostarda’, as I presented them during the lesson at Identity Golose.

Pasta is a food that many have snubbed lately. Yet it is a symbol of Italianness. Is the secret of its success also ‘not giving a damn’ about fashion?

I have little time to devote to fashion: I like cooking, and as a footballer I like to enter the game and play, instead of being on the bench. Then, in my opinion, pasta deserves to be conceptualized in many situations and also in contexts such as a side dish, because it has an incredibly elegant shape. And then, used as a side dish, we eat much less (10 or 15 grams). I think that Filippo Tommaso Marinetti the father of futurism, would have been happy too, since he claimed it caused drowsiness. Of course, if you eat a kilo of pasta in August, in a tunnel… Conceived as a side dish in mostarda, maybe he too would have seen an extremely artistic element in pasta. Because it is a product created by humans, from the earth and the sun in Italy: what more do we want?

Pasta in mostarda is undoubtedly the future; the past is Paste 84 Ore, a project of two years ago, which I was unable to contextualize because it had no starch, so the pasta did not become ‘sciuè-sciuè’; the present is the cacio e pepe in a bladder, which is the past re-contextualized in the pig’s bladder.

Surely this profession is learned mainly in the kitchen and at the table. I must say that I have always tried to frequent the tables since I was young: they are all mnemonic tools that we need to build a rich and flourishing baggage, in order to one day be able to interpret ourselves in the kitchen. Creativity is nothing more than the set of a lot of information that we managed to obtain during the course of a whole life and that we were able to interpret. Pirandello used to say that creativity is like a slice of bread: a solid food on which you can spread jam. So let’s remember that creativity and certain results are the result of a long journey of a craftsman, which is based on time, constancy and perseverance.

Before the presentation of the Michelin Guide 2022, we asked the experts for a forecast: everyone would have awarded it at least a second Michelin star. Would you like to get this recognition and why doesn’t it come in your opinion?

I can only answer for what I know: I don’t write the Michelin GuideI probably would have given myself twenty stars [laughs]. I have lived my approach with Michelin since I joined Gualtiero Marchési‘s kitchen: it has therefore always been a great dream and a great ambition, and I must say that I am sure that the emotion that would bring an extra star would be great; at the same time, at my age (50), I am also strongly anchored in what I recognize giving me pleasure, which is cooking itself. I have lived it for so many years, that I remain who I am. I will be very happy if the accolades arrive, but my job is and always will be the same: being a cook.