I had a lovely time at Gganbu, but next time will be even lovelier. I was out for dinner with my recently departed radio producer Rob, but this is a restaurant built for squads, not couples.

We ordered two things and as I looked through the menu for a third the waitress insisted that we would have too much food. I’ve won these face-offs plenty of times before and eventually she yielded, but of course she was right — each platter, when it arrived, looked like it had been designed to feed a rugby team, not two weaklings from the media.

Still, with your interests in mind, I like to try as many things as possible on a menu and I did feel a bit glum with only three different dishes to write about.

As the girls next to us got up to pay, leaving several perfectly edible plates of food behind, I whispered to Rob, “Do you think it’d be bad for me to have a burn on their leftovers?”

He didn’t flinch but replied with the calm certainty of man accustomed to hearing stupid ideas from presenters. “Think of the headlines,” he said, then returned to his pancake. 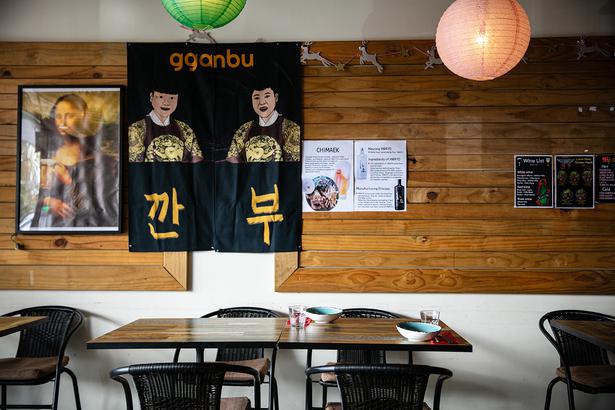 “Whatever you order I predict you will love it,” says Jesse Mulligan. Photo / Babiche Martens

The reality of the dining room doesn’t quite match this promise, although it’s a nice little space and the K-pop on the big screen constantly reminds you where you are (surely one of the few examples of a television adding to the atmosphere rather than subtracting from it).

While the restaurant is branded around a happy partnership of two chefs (gganbu means “old and close friend”) you in fact never see them when you’re there.

RESTAURANT REVIEW: A Killer Combination Of Style & Romance At Gaja

The excitement and personality of the captions on social — “Remember the ramen dish that went viral after it debuted in the Korean film parasite? RAM-DON! We have our take of the dish on the menu too!” — is absent when you’re there.

The menu has pictures of each dish (and is the size of a photo album) but there is no description or commentary, and no further info provided by the person serving you. Unless you know about these dishes already, there’s a lot of ordering and hoping for the best.

These aren’t so much complaints (somebody who was disappointed every time reality didn’t match up to Instagram would quickly become depressed in 2022) as exciting areas of potential, I think. Why couldn’t the chefs pop out at some point in the night and say hello? How about a menu insert that welcomes you and gives you a bit of history and a guide to ordering? 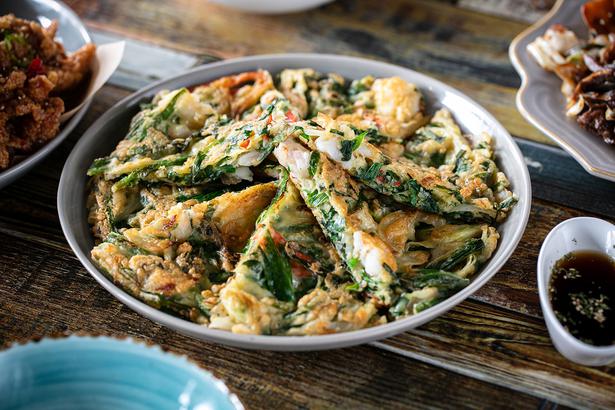 Well, luckily, whatever you order I predict you will love it. A platter of fried chicken seemed compulsory and we took the waitress’ advice on soy-chilli (there’s a whole page of options). I’d usually drift toward a sauce that was sticky, sweet and spicy, but this was more of a dressing sitting beneath the (perfect, crunchy, tender) battered cutlets of chicken and scattered chilli, and worked nicely as something to dip into.

It came with a fresh raw salad with a squeeze of mayo and, honestly, if you weren’t feeling super-hungry, for $28 this would almost do you as a light meal with a couple of cold Asahis on tap (the winelist is very bare but that’s okay, I reckon factory beer is a not a bad accompaniment to this sort of food; or, if you want to try something more traditional, you can read up on “so-maek” back on their Instagram page).

We ordered those parasite noodles (not how they refer to them, obviously) and they were satisfying in all sorts of ways — dark, slick, and pan fried with veges and beef, the sort of thing you crave at 9pm if you ate something calorie-restricted for dinner .

And how lovely is it to have a pancake in the evening? “Normally enjoyed on rainy days, the sizzling sound in the pan mimics the drizzling rain outside. We recommend pairing pancakes with Korean rice wine,” I later read on one of their posts from January, and next time the weather is inclement I’ll act on it. 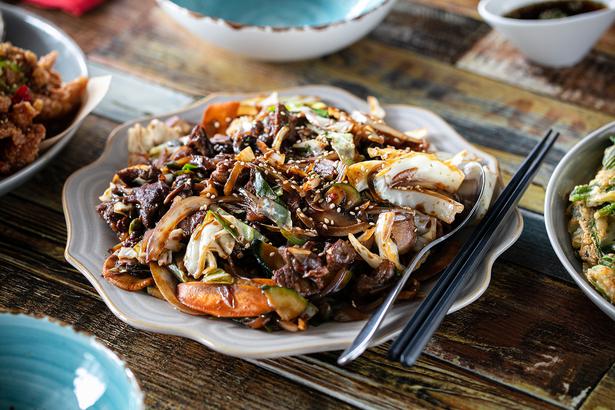 Our prawn and chive pancake was generously filled with prawns, the batter barely holding on to its payload as you lifted each piece to your mouth. It’s another 9pm fantasy dish, though by the time I’d finished I was that pleasant kind of stuffed, chilli-frazzled food-drunk that Korean food in particular seems to elicit.

I paid the bill happily then remembered that I’d forgotten to check out the toilets.

“Will you review them for me?” I asked Rob as he headed in. On the bike home my phone buzzed with a message praising the art, reading material and cleanliness, with pictures as evidence (the first time one man has texted somebody photos from inside the Gganbu toilets probably/hopefully).

This is a real gem of a restaurant and is one of half a dozen great places within walking distance. It’s going to be a big hit, so grab some friends and get a table while you can.

Kwame Onwuachi’s Nigerian Suya Is the BBQ Recipe You Need

The Best Mortar and Pestle Is Japan’s Suribachi and Surikogi