On Rabindra Jayanti, 2 special recipes from the Thakurbari kitchen

Rabindranath Tagore celebrated across the world for his literary skills, music and art for over centuries, merits as much a serious study of his culinary choices and preferences as well. Tagore underlined through his food choices and recipes a beautiful synthesis and respect towards diversity in food tastes. Universalism is celebrated both in his words of him as well as in his kitchen of him.

In “Jibonsmriti” (Reminiscences), Tagore recalled several images of food. Luchis (deep-fried puffs out of a dough of refined flour) were served for breakfast at Jorasanko during his childhood. One of the servants, as Tagore recalled, was more interested in food for himself than serving the Thakurbari children. Tagore wrote in his memoirs of him, that the servant served the you fight unwillingly, literally throwing them on the plates and then with a frown on his face used to ask them if they would like some more. When he was sure that no more you fight were required, the servant was considerably pleased. Interestingly one of the earliest lines written by Tagore when he was about ten years old was about food. he wrote,

(Mix ammshotto (dried pads of mango) in milk/ Add bananas into it/ Flavor it then with Sandesh/ Slurrp, Slurrp and nothing else can be heard/ There are no morsel left for an ant to taste).

Tagore here evokes rich imagery of food nostalgia. Tagore in his memoirs of him recalled that as a child, he often saw women of the household making Boris (dollops of lentil paste sundried) and pickles which were then dried under the sun on the terrace of the Jorasanko house.

Just as the bard had infused elements of fusion in his music and art, his food tastes and preferences were eclectic too. Tagore collected menu cards from the buffets he attended across England, Spain and Turkey and introduced recipes like Salmon in Hollandaise sauce, British Pie and Hindustani Turkish Kebab in the kitchen. Cooking techniques like baking, roasting, and stewing were introduced for the first time. Tagore loved fish and had a sweet tooth. From Macher Chorchorri to Prawns in Yoghurt, Fish in Vinegar to Tomato Fish-Thakurbari kitchen he loved to experiment. Dishes such as Filipino Chicken, Irish Stew, Prawns in Cucumber and Coconut Milk point to the fact that culinary rainbows across the world are fused in the Tagore kitchen. Imagine Macaroni and Fish baked being served at the Thakurbari dinner table.

Tagore, on his return from England in 1879 brought with him a taste for western culture in music, theater and food. A ‘Dramatic Club’ was established where Tagore himself and his nephews were active members. The club staged Tagore’s Bisarjan in 1887, however, the club folded up just after the performance. With the money left in its accounts, a sumptuous dinner was organised. Abanindranath Tagore recalled in his memoir that Mutton chops and Neapolitan Cream was so delicious that ‘not even a wee bit of morsel was left behind.’

Rani Chanda, a student in Santiniketan in the 1920’s and ’30’s has given an account of the culinary habits of Tagore in her book Gurudev. According to Chanda, Tagore had his morning tea at early dawn. Along with bread and butter or jam, boiled eggs and cereals for breakfast Tagore had tea for breakfast. A full course lunch had to be served even though he ate very little of it. A large plate with bowls used to be placed before him and he would open the lids of bowls and see what was in them. Then some of these bowls were sent to the inmates of the ashram. After most of the items were distributed, he took his own little share from that which was left. Lunch was concluded with a bowl of curd. Dinner saw a continental spread consisting of soup, roast chicken or fish and pudding.

Interestingly Tagore had phases of food preferences, quite similar to Gandhi. At one point Tagore ate only boiled vegetables with rice soaked overnight in water (panta bhaat) every day. This was quickly replaced by a raw egg diet which was followed by two glasses of neem juice every day. At one point, Tagore decided to have parathas fried in castor oil. According to Rathindranath Tagore, the eldest son of Rabindranath and one of the first students of the Brahmacharyasram, in Vishwabharati the food was comparable to a prison diet in its simplicity and monotony. Muri (puffed rice) and gur (jaggery) was served for breakfast. On Wednesdays, there would be I fought and sugar. Lunch and dinner had the same menu. The ashramiks had to eat quietly and were not allowed to criticize the food. They were required to wash their own dishes. Tagore himself followed a vegetarian diet in this phase, which could have been due to a shortage of funds and also because he wanted to share the same food that was served to the students and the inmates- something which can be termed as food solidarity.

Tagore’s experiments with food were constant throughout his life, quite akin to his forays into new literary styles and themes.

Here are two of Thakurbari’s recipes which are my favourite: 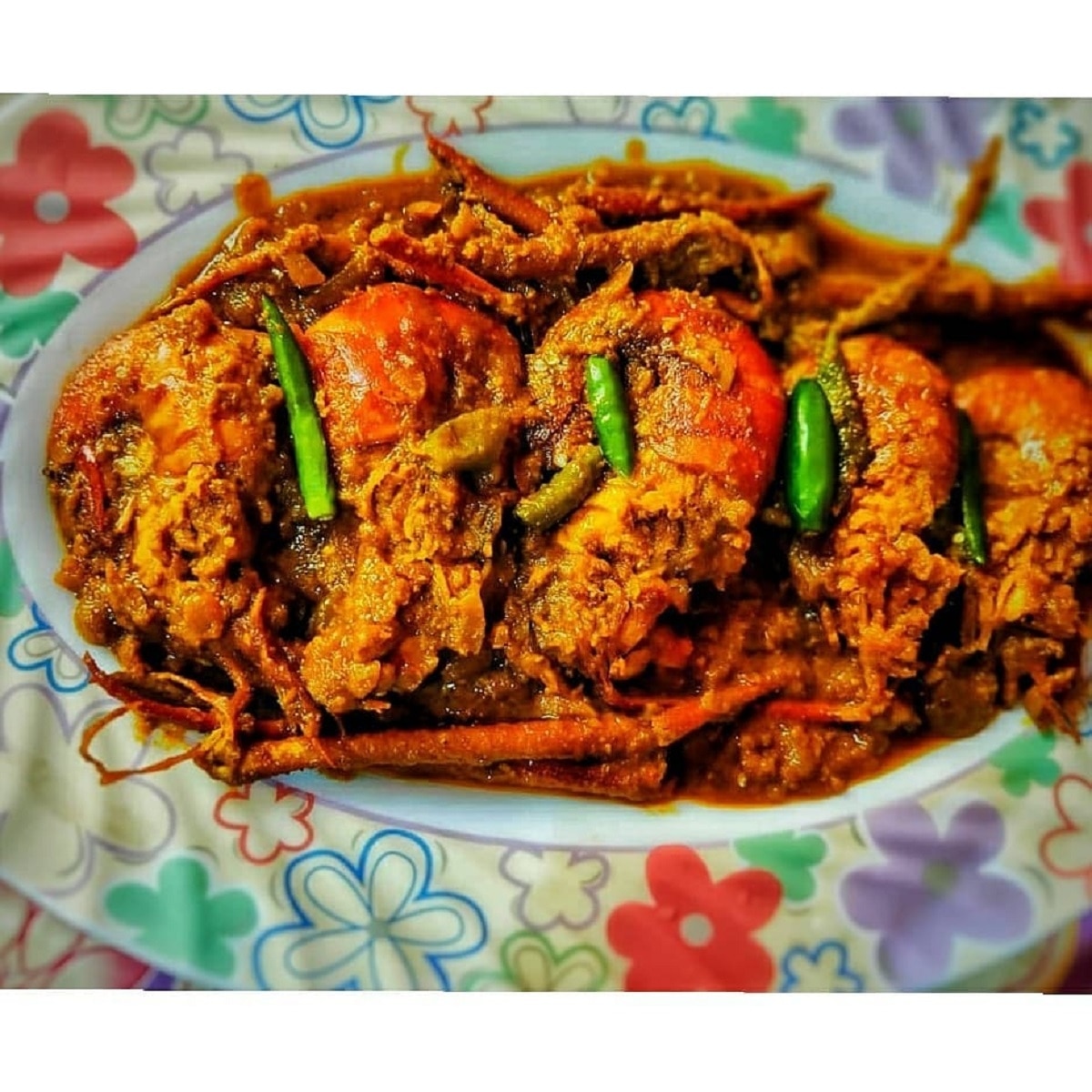 Salt and Sugar to taste

Marinate tiger prawns in curd/yoghurt and chopped green chillies for about half an hour. In ghee, add whole garam masala and once spluttering add the prawns with the yoghurt. Add salt and sugar. Cover for about 5 min. Once the ghee separates on the sides, add chopped coriander leaves and serve with pulao or steamed rice. Whisk the Mishti Doi with the flour. Whisk well. Add fennel seeds to the batter. In hot ghee, add one ladleful of batter. Fry till puffed up and light golden in color. Add the Malpuas in hot sugar syrup flavored with cardamom powder.

The recipes are inspired from the book Thakurbarir Ranna by Purnima Thakur.