The restaurant, formerly cocktail haunt Quarter + Glory, was brightened up with whitewashed brick, tropical plants, and a 14-seat chartreuse-hued bar. Spirits star Glendon Hartley (Service Bar, Causa) is behind the drinks. The son of Trinidadian immigrants, Hartley says he plans to highlight Caribbean flavors and ingredients beyond the usual tropical fruits and rum (but yes, there’s still plenty of rum).

“You have so many ingredients people don’t know are form the Caribbean. They think it’s all pineapple and tiki cocktails. Tiki drinks aren’t Caribbean drinks, they’re faux-Polynesian drinks, and it’s cultural appropriation in a way,” says Hartley.

Hartley works in tandem with the kitchen for cocktails like the Pineapple Chow, inspired by the popular Trini snack of fruit, chilies, shado beni (a cilantro-like West Indian herb), and pepper. Take those bright, spicy flavors, add Angostura White Oak Trinidadian rum, and you have a delicious drink. Also: one that doesn’t waste any ingredients, a focal point of Hartley’s no-waste bar program. Herb stems, fruit pulp, citrus scraps—they all get used one way or another.

“In the Caribbean we use everything,” says Hartley. “Growing up cooking with my parents, I’ve always known that just because you use one part of something doesn’t mean the flavor is gone.”

St. James was originally planned as a family venture with Jeanine’s brother, James Beard-nominated chef Peter Prime, who has since parted ways with Cane and joined Caribbean eatery Bammy’s in Navy Yard. Now helming the kitchen at St. James: longtime Cane chef Emma Hernandez and Fiola Mare alum Alfredo Romero Contreras, both of whom collaborated with Jeanine Prime on the menu.

“The food at Cane, to draw some contrast, centers heavily on the East Indian influences on our cuisine. We’ve been able to showcase the other prominent influences in our food here,” says Prime. Diners will find some cross-over flavors at St. James, such as a platter with assorted curries and homemade paratha bread. But Prime is excited to highlight West African traditions in callaloo soup topped with fresh crab, salt-cured cod crude, or “provisions” (root vegetables) cooked with salt pork and coconut. “The use of salt-cured meat and fish is ubiquitous across the Caribbean, and often referred to locals as ‘oil down,’” says Prime. “It was how slaves were able to preserve food, and they’re still an important way to flavor food.”

Chinese influences can be found in dishes such as pork prow, steamed buns stuffed with spicy pork. French and Portuguese flavors come through in twice-cooked garlic pork with jus. The kitchen also makes use of local ingredients, such crab-and-dumplings, a popular beach snack that’s made here with crispy Chesapeake soft-shells, homemade taro dumplings, and coconut-curry sauce.

“I’m really excited about the opportunity to showcase the range of Caribbean cuisine,” says Prime. “I hope we’ve done justice to the variety of cooking styles you see across the Caribbean.”

Take a look at the opening menu here: 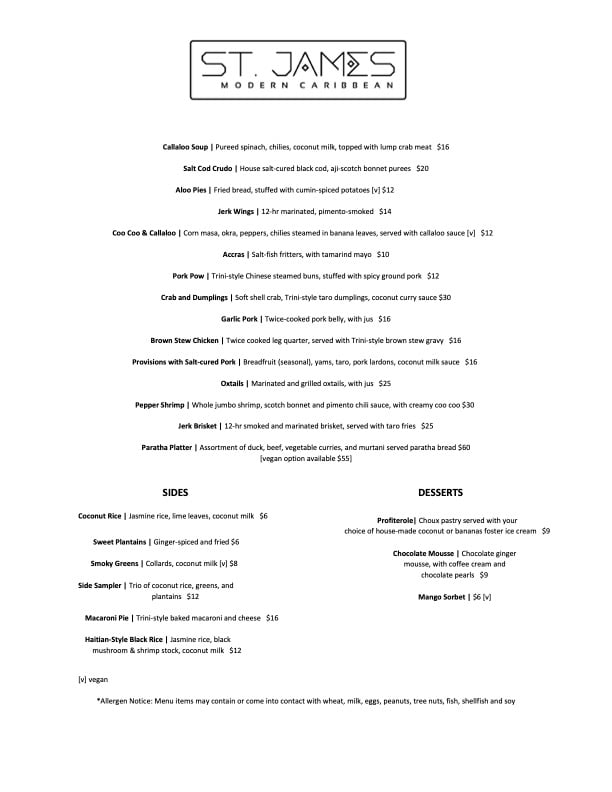 Anna Spiegel covers the dining and drinking scene in her native DC. Prior to joining Washingtonian in 2010, she attended the French Culinary Institute and Columbia University’s MFA program in New York, and held various cooking and writing positions in NYC and in St. John, US Virgin Islands.

All the new Tunbridge Wells cafes, restaurants, and takeaways opening in 2022