According to a recent YouGov survey, kebabs are Britain’s sixth most popular takeaway food, beaten by Thai, pizza, fish and chips, Indian, and Chinese – which reigned supreme with 25 percent of the votes. Only 3 percent of Brits chose the humble kebab as their favorite takeaway food.

Often revered as a typical ‘drunk’ food, kebabs are criminally underrated in the UK – even though kebab shops can be found on just about any high street, many of which serve excellent food that’s sustaining and relatively healthy (especially compared to the likes of fish and chips or pizza). They’re also widely accessible, with most kebab shops open late for us to take advantage of. If you’re looking to recreate takeaway kebabs at home, however, this chicken shish kebabs recipe is both simple and delicious, ideally cooked on the barbecue and stuffed into a warm flatbread with salad.

Either chicken breast or thigh meat can be used for this recipe. While chicken breast is generally less exciting, it cooks quicker and is considerably leaner. Thigh meat, on the other hand, is more flavorful and economical, but will take a little longer to cook.

Once cooked, the chicken should be white and opaque in the center, with the juices running clear. If using a thermometer, chicken breast meat should register at 72C/160F, or 74C/165F for thigh meat.

If you don’t have a barbecue to hand, the chicken shish kebabs can be cooked on an indoor grill, on the stove in a hot skillet or griddle pan, or in the oven. The oven should be used as a last resort though, as none of the smoky flavor will be imparted. If you do need to cook the chicken shish kebabs in the oven, however, preheat to 200C/180C fan/gas 6 and cook the kebabs for 20-30 minutes, turning halfway through cooking.

The chicken shish kebabs are delicious on their own, with the meat removed from the skewer and piled into soft flatbreads with salad, or with sides such as bulgur, keskek, rice pilaf, or simply with chips. Leftovers are also delicious eaten cold.

The chicken shish kebab marinade ingredients can also be adjusted to suit personal taste. For a spicy kebab, use chilli powder in place of paprika, or use a sweet paprika for a milder dish.

If you’re looking to replicate the kebab shop experience, serve the kebab in sliced ​​pitta breads, lightly toasted on the grill. Wrap the kebab in paper for a few minutes to help soften the bread. Serve with typical salad ingredients such as cucumber, tomato, red cabbage, sliced ​​onion, shredded lettuce, and pickled chillies. The kebabs shouldn’t need sauce, but you can’t go wrong with a dollop of chilli sauce or garlic mayo (or even a bit of both). 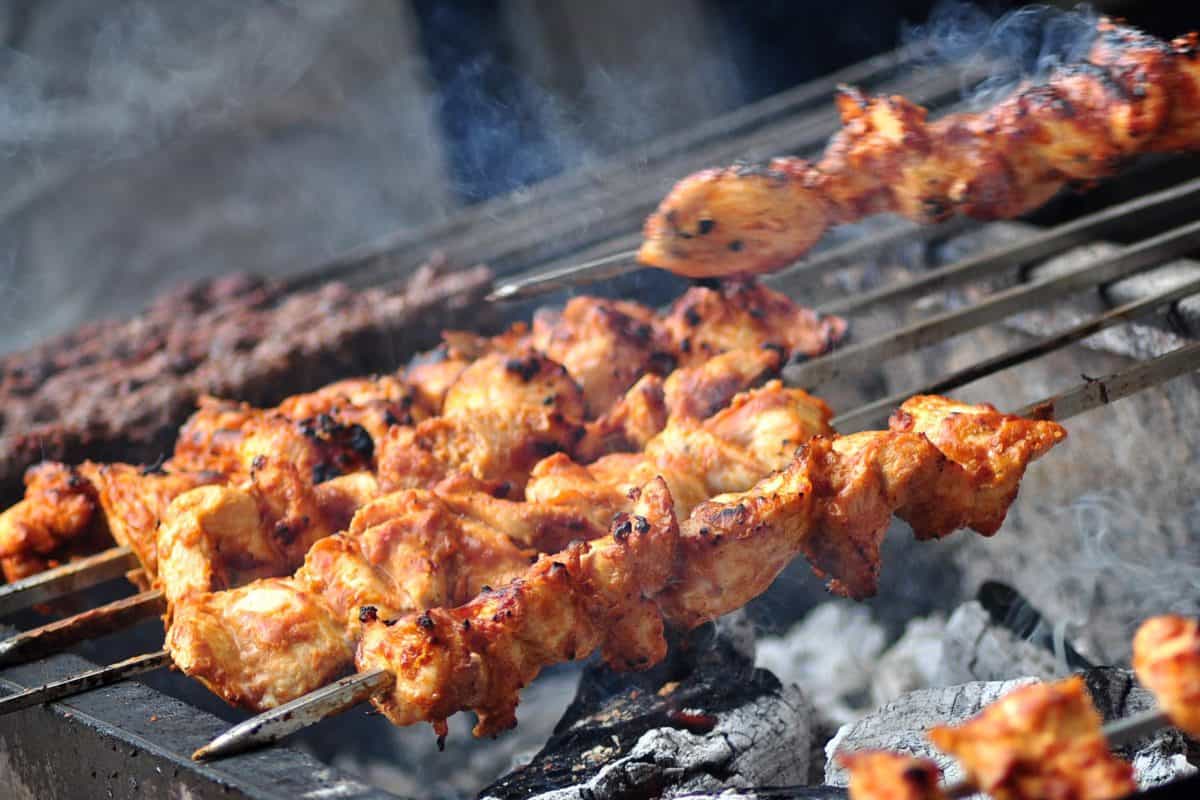