When the weather heats up in Houston, many of us get a yen for a cold margarita at the end of the work week and it’s even better when you find a willing partner to convince you to play hooky. Last week, my husband and I decided to satisfy our yearnings after having been margarita-free for nearly a month. We had been to a Cinco de Mayo event the night before which included beer, wine, an elote cart, paddles and mariachis but, unfortunately, no margaritas. We figured skipping work for ritas and chips the next day was justified and I suggested we head to the newly open La Calle Tacos on Ella to check out their tacos, and hopefully, margaritas.

My husband and I used to live in Oak Forest 20 years ago so when we drove up to La Calle in the Ella Oaks shopping center, we mused on the fact there was nothing but fast food restaurants in our day, except for across the freeway toward Tony’s Mexican Restaurant, Cavatore and Rainbow Lodge.

Now, the Garden Oaks/Oak Forest neighborhoods are teeming with restaurants of every cuisine and a couple of brew pubs, too. Saigon Hustle shares the same shopping center and parking looked tricky coming off Ella but we actually found a space right in front of La Calle. 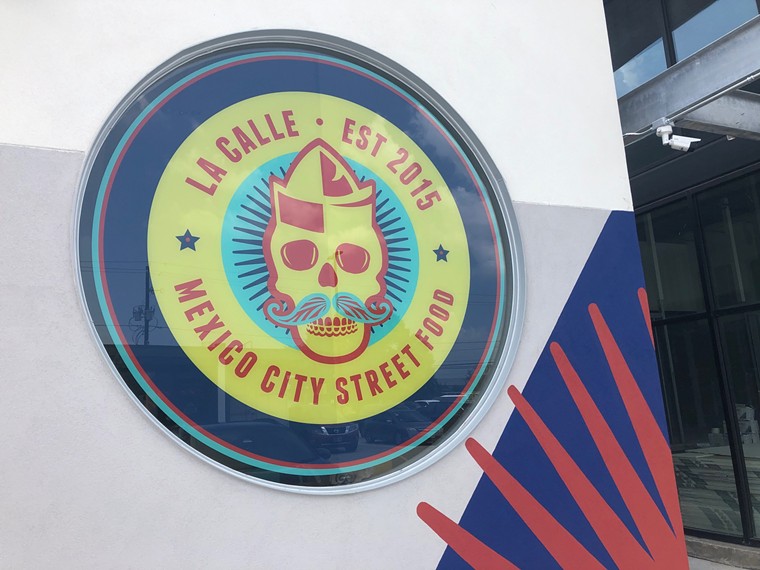 This is the third location for the street taco concept which opened its first location in downtown Houston in 2016. It comes from co-owners Ramon Soriano and Fernando Villegas. The duo opened a second location in Midtown in 2021. The Ella location just recently opened, as we reported in the Houston Press. Perhaps it was a bit premature to do a First Look so soon, but the menu looked enticing and the promise of a Friday happy hour lured us as well.

We were greeted as we walked in and given a menu. I always like to be prepared so I had perused the offerings online. However, that menu was not on the laminated placard we were given. There was a QR code for a “secret menu” so we scanned it and the online menu popped up, though hard to read on the phone. 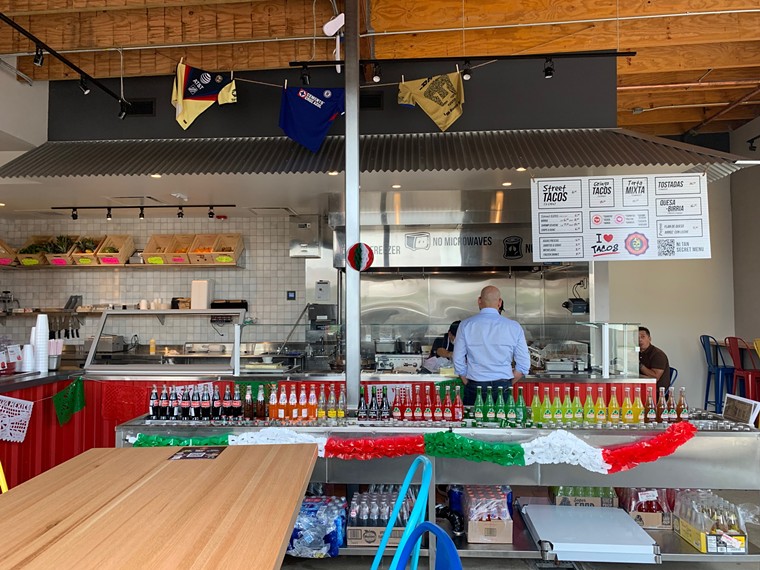 Lots of Jarritos but no ritas that day.

I wasn’t sure where to order. There is a long counter behind which staff were cooking and preparing the food. An employee was staffing a tablet at the opposite end. Not sure which way to go, we stood behind a woman giving her to-go order as she consulted her phone for the menu. Though there were five employees, they each seemed to have a dedicated job so only one customer at a time could be helped.

When our turn came, after about ten minutes, it was a little difficult to hear because the staff are masked and there is a see-through partition which separates the customers from the food prep. That’s great for hygiene but difficult when both you and the employee you are talking to are barely above five feet tall. We both had to stand on our tip-toes to hear each other. 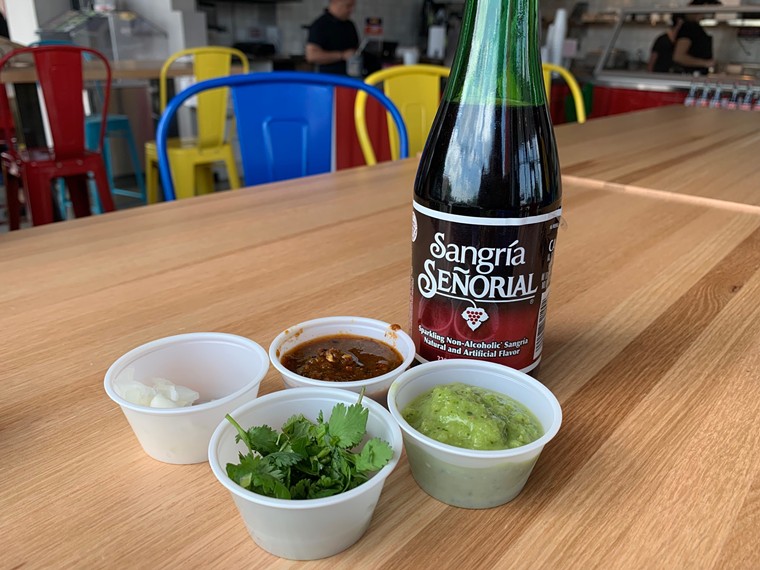 Non-alcoholic sangria is just not the same.

I ordered the sampler platter ($13.99) which seemed a good way to get a taste of the restaurant’s tacos. The sampler includes two street tacos, two tostadas and a gringos taco. Then, there were a lot of decisions to be made. I opted for sweater and roast meat for the toast, carnitas and apology for the tacos and chicken for my gringo husband’s gringos taco. More decisions came with the toppings and the employee was still learning the ropes from another staff member. That was understandable since they had opened so recently. I watched as pico de gallo went on the gringos, cilantro and onions on the street tacos and cream and cotija on the toast. At least, I think that’s how it happened.

I also asked for an order of the chips and salsa that I had seen on the menu and a cup of the cevichito several times but not one seemed to hear me. Unfortunately, when we asked for margaritas, the manager at the checkout tablet said they didn’t have their liquor permit, yet. I had made a rookie mistake. I should have known to double check because restaurants often open before getting their liquor licenses.

I turned to see my husband’s crestfallen face. I grabbed a non-alcoholic sparkling sangria from the cooler of Jarritos and Mexican Coke, but my companion was too disappointed to pick a beverage. When our tab was totaled, there was no cevichito or order of chips included, so we figured we could cut our losses and just split the sampler platter.

The tables at La Calle are communal high tops, mostly. The cooler of soft drinks takes up a huge amount of space in the small dining area and if the ceilings weren’t so high and there weren’t floor to ceiling windows, it would feel a little claustrophobic. 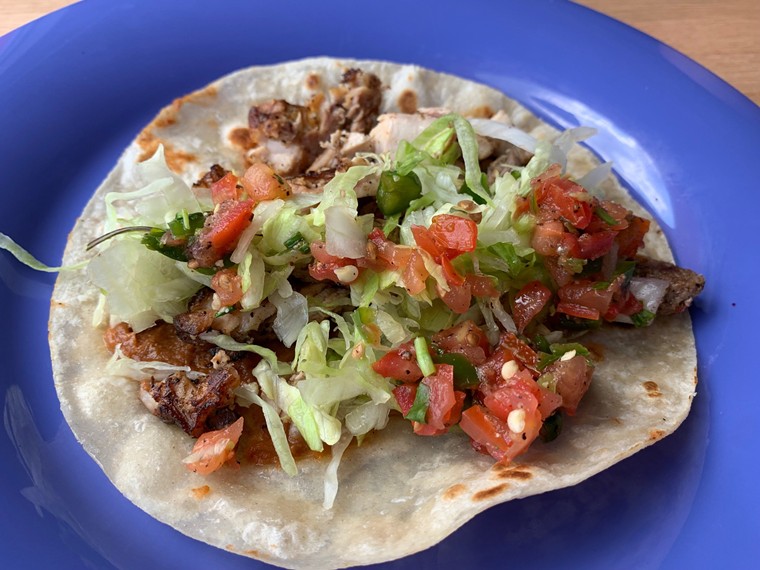 Gringo tacos get loaded with toppings.

It wasn’t very busy, yet, so we didn’t have to share a table. We grabbed a couple of different salsas from the salsa bar and instantly regretted not getting an order of chips. My husband was still depressed about the much-anticipated frozen margarita so with the promise of going for a drink afterwards, we dug into our sampler.

The gringos taco was decent. The chicken was well-cooked and the flour tortilla had been grilled, giving it a little extra flavor, along with a smear of refrigerated beans and the salsa rioja that we added ourselves. The street tacos of carnitas and birria were very good, though the small corn tortillas did not stand up to the good-sized portion of meat that was given. Trying to dip into the birria consomme It was very difficult but boy, oh boy, that beer was good. And spicy. It can also be ordered by the cup or bowl with a choice of meat. It was definitely a highlight and I think that might be a contender for the next visit. 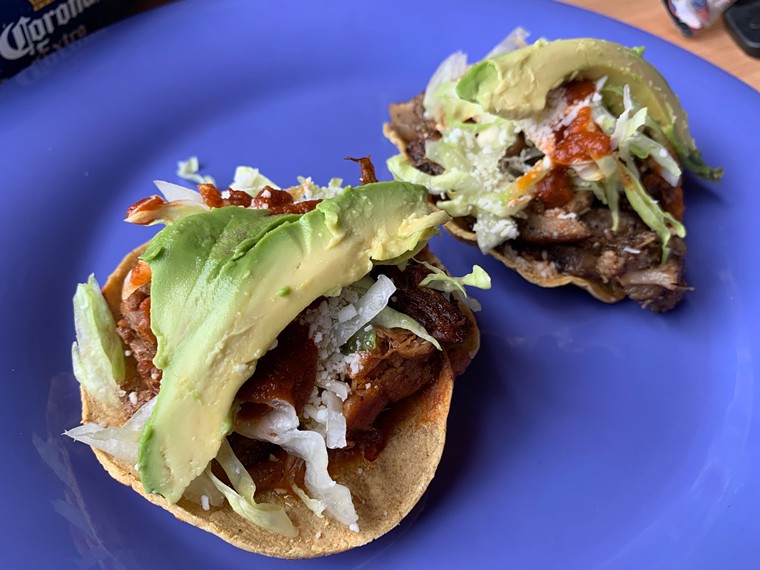 Toasts are the way to go.

For me, the tostadas were a better choice than the street tacos. The fried corn tortilla was a much sturdier vessel for the meat and toppings and the texture of the crunchy tortilla against the tender meat and whatever salsa one’s heart desires was a better balance and easier to eat. Plus, who doesn’t like fried tortillas? That made me think I had really missed out on not getting the chips which are fried in-house. The tostadas each had a large slice of avocado which took them quickly to the top of my favorites.

The sauces were also a standout. the Avocado Salsa, or avocado salsa, was so fresh and delicious that I could have it in a tortilla by itself and be happy. The salsa rioja and the chipotle salsa had just enough heat without being dangerous. 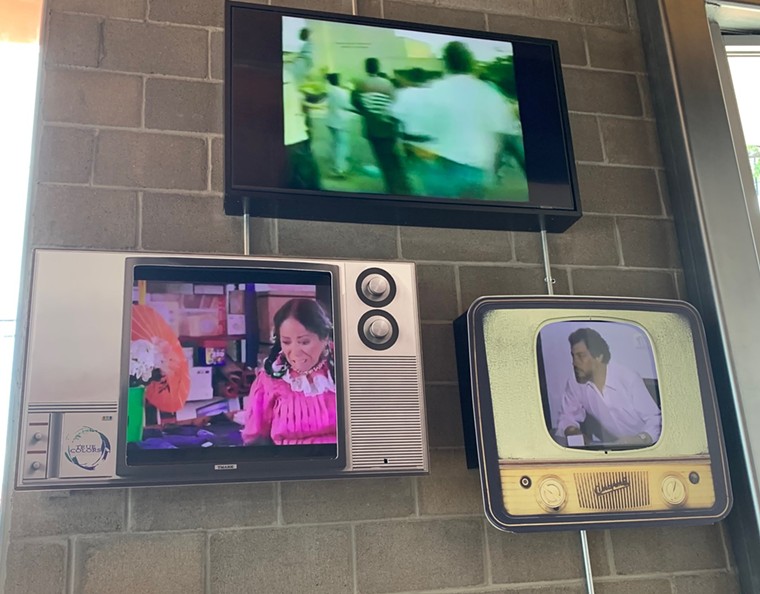 The retro televisions are a neat touch.

So, despite being bummed about the margaritas, the food was tasty and freshly prepared to order. The ordering experience itself, however, was pretty inefficient. As we were heading out, the lunch crowd was coming in and everyone seemed to be unsure how the process worked. And, the “secret” menu has far more options than the menu given to us. The sampler was a good way to find a favorite. I am going with the tostadas next time and definitely ordering some freaking chips. And I will make sure the margaritas, which I have heard great things about, are available. On a second look.

So, we left La Calle in search of a frosty margarita in the area and found ourselves turning into Juanita’s Mexican Restaurant on TC Jester. We had only been once before but we remembered the margaritas as being decent and that’s all we needed. Or so we thought. 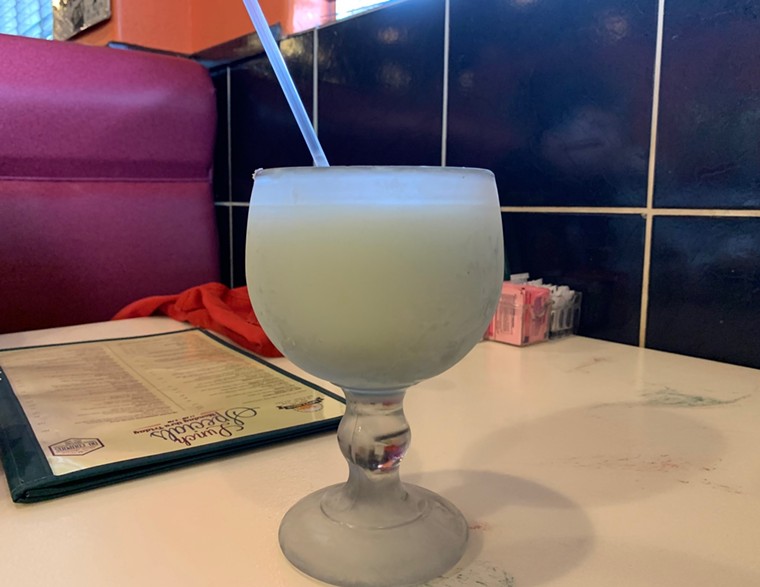 The holy grail. Kind of.

Within minutes of ordering, we had two giant goblets of slushy margarita on the table. My companion was now happy and we noshed on chips and cheese. It was pretty standard stuff but it hit the spot. We also ordered a Mixta Platter ($17.99) because we are all about sampling and we figured we could take home leftovers to the teenage garbage disposal for his dinner from him.

Juanita’s is pretty much a Tex-Mex textbook. Pastoral murals of rural Mexico line the walls and the chairs look as if they’ve been around a while, but it’s clean and colorful. The restaurant has been on TC Jester since 2000. There are two other Juanita’s locations in Cypress but they are no longer affiliated with the TC Jester restaurant. 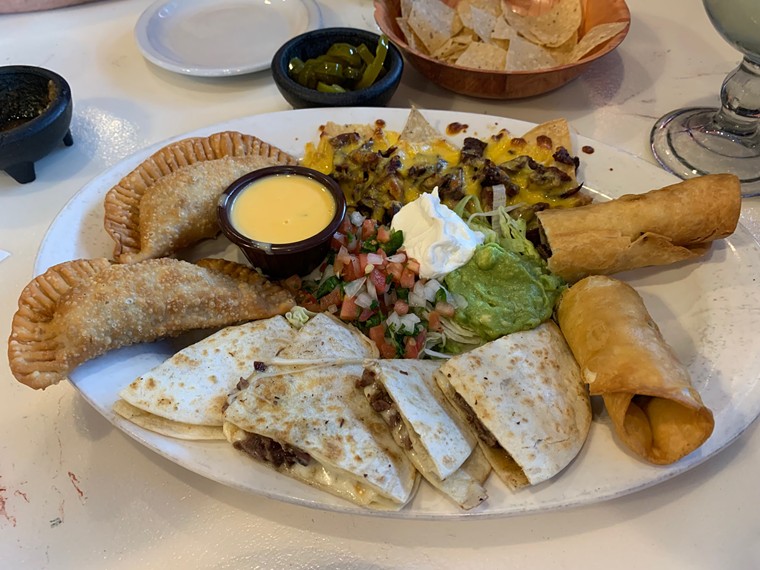 Mixing it up with a mixed platter.

Our sampler platter was a mix of steak quesadillas, steak nachos and steak flautas plus two chicken and corn empanadas. The steak was flavorful but on the chewy wide. I was impressed by the lightness of the fried flour tortilla on the flautas but it was the empanada that surprised us. The pastry was perfectly fried and the filling tasted like a spicy chicken tortilla soup. It was a delicious treat that I would definitely order again. 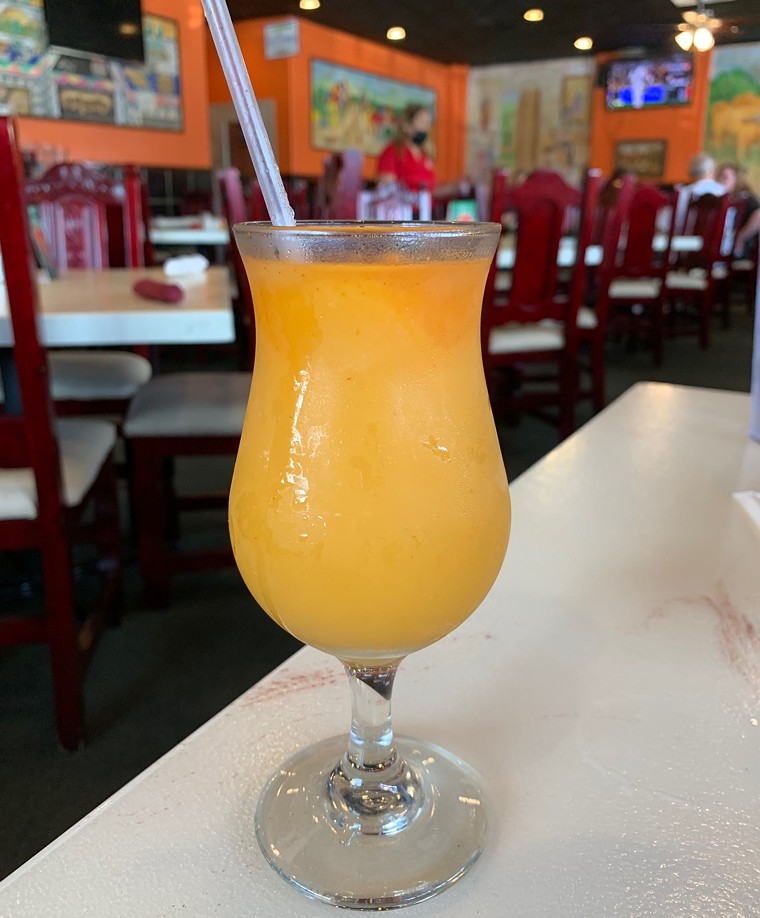 The mangonada is a tropical treat in a hectic city.

I then opted for a small mangonada but it was a bit on the sweet side, so I just added it to the melted remnants of my lime margarita. Juanita’s has a weekend happy hour from 11 am to 7 pm but we were there on a Friday and our large margaritas were only $5.95 and the small mangonada was $3.95. Our earlier disappointment had been alleviated and we’d had the best of both worlds that afternoon: a modern street taco eatery and an old school Tex-Mex restaurant.

And while the margaritas at Juanita’s had seemed fairly innocuous, this writer had to take a wee nap upon returning home. Day drinking ain’t for wimps and apparently, I am one.

‘Indian food is having its moment in America’: Chef Aarthi Sampath